The work opens with the ever-radiant and talented Kathleen Chalfant standing in front of the curtain speaking to the audience about her childhood playing Peter Pan in her hometown theater in America’s heartland. Honestly, for a few beats I didn’t know if this was a vamp-until-ready moment where the star comes out in a heartfelt way and connects to the audience.

Chalfant’s demeanor and her delivery is so easy, natural and warm that it was as if she was telling each of us, in a packed house, her personal tale. She was transported back to a girlhood where she flew across a stage, met Mary Martin, and was handed flowers by her usually taciturn father. We are charmed.

And then the curtain opens to reveal Chalfant as Ann, the eldest in a gaggle of five adult children, all nervously surrounding their father, as he lies dying in a hospital bed. The children are John, a wonderful Daniel Jenkins, Michael played strongly by Keith Reddin, and Wendy, the always luminous Lisa Emery (following the names as the Darling children in J.M. Barrie’s tale.) There is also another brother, Jim, who didn’t become a doctor but stayed home and took care of their father as he aged. He is wonderfully poignant as embodied by David Chandler.

The siblings take turns hovering. Wendy rubs and anoints her father’s feet; Michael and John both medical doctors read charts and kibitz about care and Ann tells stories and worries about every errant sound emanating from Ron Crawford, who plays the dying dad.

The kids discuss augmenting morphine to ease pain and also hasten death. They tell some stories about their youth and their parents. They miss their mom and the family dog. They sit in hospital chairs, or sleep fitfully on the floor. Behind them is a set that resembles what must be their childhood home.

When the father finally does pass, Ron Crawford rises from the bed and continues to act out some of the things being discussed, including playing with the long gone dog, the sparky and winsome Macy, a rescue dog from Oklahoma City.

This work unfolds in ninety minutes with no intermission, but there are breaks in the action where artfully the hospital furniture is wheeled to the side and the backdrop of the house becomes the home where after the wake the siblings sit and drink, except the youngest Wendy, who seems to be more sober in many facets of her life.

The range runs wildly from humorous recollections, to long held resentments, to confusions about their parents. This is the stuff of every family, but it is done well and we believe every speech and the actors are so suited to their characters, that it is as if we are eavesdropping on an actual family.

In and out of every recollection are specks of memory about Ann’s big role, which seemed to recur often, playing Peter Pan. As the third act opens the house has resolved itself, in a genius set by David Zinn and has become the Darling home in London and the adults we met earlier are in nighties and top hats, all the trappings of the beloved Darling children. Even Macy the dog returns as Nana for a glimpse into the reverie.

Ann has found an old trunk, and again in front of the curtain, she changes into her old Pan costume, allowing for time for the set to morph and for us to once again feel that intimate rush. It is this portion of the play that for this reviewer holds the meat and the emotional payoff. Again the siblings taunt and tease each other, but the gist is about how to fly, how to be buoyantly happy so that you rise into the air and also age.

We all struggle with the unresolved issues from childhood, last week, decades ago, or what we might do wrong tomorrow, so letting go, filling our hearts and minds with lovely and lovelier thoughts is a tall order. And yet on the stage of Playwrights Horizon in the middle of 42nd Street, we watch adults born aloft, swinging, flying across the stage because they could finally find their “lovely thoughts.” This play is well imagined and helmed by director Les Water’s, who also steers the artistry of the Actor’s Theatre of Louisville.

As the siblings argue in the Peter Pan dreamscape, including a masterful appearance by Peter Pan played by David Chandler, about who has grown up, who hasn’t and why not, we all confront and imagine the places where we have missed being an adult, or might relish a tad more childishness. In the end we are all inching toward a certain ending, the alarm clock is ticking, and that either prompts buckling down or cutting loose. For some it is a mixture of flight, fancy and seriousness. Sarah Ruhl mixes an excellent concoction.

“For Peter Pan on her 70th Birthday” runs through October 1 at Playwrights Horizons’ Mainstage Theater, 416 West 42nd Street in New York City. For information or tickets, call 212-564-1235 or visit http://www.playwrightshorizons.org 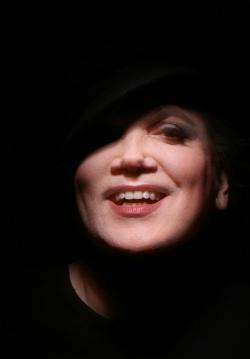 Charles Busch teamed up with Tom Judson to heat up the stage at Helsinki in the Hudson Valley with “Charles Busch: My Kinda ’60s.” Busch, whether in drag or not, with Tom Judson at the piano occasionally crooning along or taking a song himself, make an astonishingly charming, heartwarming evening. And we certainly all could use that right now.

Judson makes a piano trill and vibrate with his individual arrangements, crafted to both suit Busch’s song styling and his ability to pluck at our heartstrings while tickling our fancy. This evening was designed as a look at the songs of the sixties, and even though as Busch expounded often, “We have never performed this song!,” the duo was marvelous. It was a triumph of an evening.

Busch enters in an emerald green brocade suit with rhinestone buttons all aglitter, then asked the crowd, “Too butch?” We all adore Busch whether in drag or as in this case, “with a little mascara, maybe a false eyelash and this new suit.” He kicked the evening off with a mélange of “Your Zowie Face” and “Look at that Face, ” and it made for a raucous, happy start.

Club Helsinki is located in the now bustling and chic Hudson, New York, a two-hour train ride up the Hudson, which seems to have become the darling of New Yorkers and international visitors. The club is in a wonderfully remodeled industrial building that has great acoustics and features table service of Cajun-inspired dining or a large bar serving good drinks and snacks.

From the perch at a table center stage, the view was perfect and the evening exploded with Burt Bacharach’s “Anyone Who Had a Heart,” which Busch rendered in heart wrenching sadness. He then segued to The Beatles because, as Busch’s banter suggested, there is nothing more ’60s for him and many of us, than the Beatles. Again, Judson’s arrangement of “Here There and Everywhere” was pitch-perfect.

The evening rolled along with songs by Alan Jay Lerner, Leslie Bricusse, Sondheim, Peggy Lee, and a stunning version of “Surabaya Johnny” by Brecht and Weill. A highlight was a duet that had a rocky start, as Judson’s mike clicked in and out and so the solution was for Busch to move over to the piano bench and they shared a mike for Mancini’s “Two for the Road.” Squished together at the piano, they unleashed a joyful rendition that brought down the house and finally gave the techie a chance to figure out the sound situation.

The evening consisted of 15 numbers, a full album of songs that ended with an arrangement of Bob Dylan’s, “The Times They Are a Changin.” In this version, Judson explained that he morphed each stanza to modulate the monotony of Dylan’s original release where it was exactly the same for the many stanzas of what we now know are Dylan’s Nobel Prize-winning poems. The way the song was presented, in song styling and musically, allowed the poignancy of the music and lyrics to shine through. And although bittersweet for those of us who heard the anthem in the ’60s and thought we were changing the world, it is still a rallying call never to forget that we must continue to be vigilant and believe.

There was as, Busch called it, a fake encore, as they didn’t leave the stage and we all would have called them back for as much as they would offer. That encore was Raskin’s “Those Were the Days,” where the audience can be rallied to clap and cheer.

Busch and Judson are off to Spain for their next tour; for more information, visit charlesbusch.com.