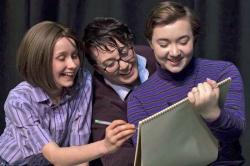 “Welcome to our home on Maple Avenue… ” sings the excellent cast of “Fun Home” in the Hudson Valley’s Center for Performing Arts in Rhinebeck, N.Y. The Tony-winning musical is receiving its regional premier in a production by the Rhinebeck Theatre Society.

This musical reinvents a classic coming of age story seen through the eyes and pen of cartoonist Alison Bechdel. Her graphic novel of the same name is the inspiration for the transporting words and music of Lisa Kron and Jeanine Tesori. This transcendent work is something this reviewer saw in each iteration as it moved from tiny stages to Broadway glory. As a fan, I was worried that a small regional company might not do justice to this musically intricate work that combines nuanced themes of belonging with coming to terms with sexuality and suicide told with rollicking humor. But when the first song rolled over me and the beautiful set (by Andy Weintraub) unfolded, I was gob smacked.

The work chronicles Alison’s growing up with a closeted gay father, and her coming out to her parents during college, followed soon after by her father’s suicide and admissions of his latent and actual longings. The work intertwines Alison at three ages (small, played with a kind of vigor and impish pluck by Eliza Petronio, medium, comported and sung with bravery and bravado by Mary Kate Barnett, and adult, in the person of Alison, the grown woman cartoonist whose performance is full throated and glorious.

Add to this mix the very poignant and dulcet tones of Jared Allyn Decker as the conflicted father and Alex Heine as the soulful, long suffering mother of three and wife to a gay man. The other children, John, played joyfully by Molly Lyons, and Christian, brought to life forcefully by Jamison Fountain. There is also a bravura performance by Lisa Delia as Joan, the gal who wins Alison’s heart to such a degree that Mary Kate Barnett sings “I’m changing my major to Joan,” a wonderful first love song.

These amateurs, under the deft direction of Dot Luongo and the skilled orchestra led masterfully by Paul and Joanne Schubert, bring down the house with raw emotion and often-hilarious moments. The “Fun Home” (slang for the funeral home where everyone lives) gives rise to hijinks as well as a kind of confusion about the blurred lines of home and work, life and death, the sense of belonging and worldly expectations.

Alison Bechdel is the woman who coined the term “The Bechdel Test,” which asks whether a work of fiction features at least two female characters that engage in conversations about anything other than men. The test has become a litmus test for deciding if there is an active presence of women in films, drama, and literature. And this work certainly puts female characters front and center without minimizing the importance or thrust of the men in the story.

Rhinebeck Theatre Society states in their press release, “A 2015 report from the New York State LGBT Health and Human Services Network shows that LGBTQ people in the Hudson Valley also deal with limited or poor media representation, family estrangement, limited access to affirming healthcare, and severe social isolation. ‘Fun Home’s’ honest representation of LGBTQ narratives will be particularly impactful with a cast of nine local actors, many of whom identify as LGBTQ, especially for specially invited audiences of local high school Gay-Straight Alliances.”

This important work is a lyrical look at how we remember and how we resolve wounds in order to stitch together meaningful lives. The music, the lyrics, and the excellent production all weave together to produce an evening that will soothe and stimulate in equal measure. Bravo.

“Fun Home” continues through June 24 at The CENTER for Performing Arts at Rhinebeck, 661 Route 308 Rhinebeck, NY. Performances: Fridays & Saturdays at 8PM, Sundays at 3PM.
Ticket Prices: Adults $27; Seniors $25; $20 student tickets at the door. “Pay What You Will” Fridays (cash or check at the door)
For more information, visit the theater’s website or box office (845) 876-3080.

This entry was posted in reviews, theater. Bookmark the permalink.