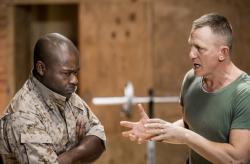 We live in a time of treachery, tyranny and deception when false news, mendacity and racism rule our rulers and cloud our lives. Welcome to “Othello.” Written in 1603 Shakespeare’s Moor and his goad Iago are an equal pack of villains who are manipulated by hatred and insecurity and then act upon gossip and concocted scenarios to create a world filled with havoc and writhing bodies.

Are you ready for this? The New York Theater Workshop’s excellent version of “Othello” will leave you wrung out, speechless and begging for more. This modern-day production converted the theater on East Fourth Street into an environmental set of roughshod, wood-hewn army barracks. Andrew Lieberman’s set announces itself before you walk in, as the aroma of fresh cut pine wafts through the air.

Once inside, a conscript lies on his bunk, comprised of mattresses tossed willy-nilly on the floor of the stage. He plucks his guitar. Another soldier joins him, as do more, including a former actual Vet who removes his prosthesis and lolls on his mattress, all this as the audience wanders in to find their seats and be instructed by the eager ushers to carefully stow your own gear and keep aisles open. The play will rush past you at times, so do not step into the center of the field of play.

The room is brightly lit and then darkness falls and lingers and we hear murmurs from the soldiers and see them furtively looking at their electronic devices, which for an instant light their faces and portions of the room. The play begins as the Duke, played with grand nature diction by David Wilson Barnes, unfolds a portion of the premise.

For those of you who haven’t had the pleasure and terror of reading or seeing “Othello” recently, let me attempt a short synopsis. Othello is a Moorish ( meaning black and Muslim) captain in the Venetian army. The play opens in the midst of an argument between Roderigo, who is a wonderful, lisping comic diversion in this production (Matthew Maher) and our master villain Iago, played by Daniel Craig.

Craig enters, almost unnoticed in khaki shorts, a ball cap and a ratty green T-shirt. He speaks and the room vibrates with his command. This first scene shows that Iago has many fish to fry with his cunning. He has convinced Roderigo to sell everything he owns to get money so that Roderigo can woo Desdemona and marry her. When Roderigo learns that Desdemona has married Othello, a general whom Iago serves as a lowly ensign, a fight ensues and the brawls continue.

Iago is juggling, pitting men and woman against each other. He entreats his wife Emilia, the strong, snappy Marsha Stephanie Blake, to unwittingly plot against her mistress, the limpid-eyed, lovelorn Desdemona, Rachel Brosnahan. The audience titters as Iago is referred to endlessly as honest Iago. We know what lurks in his heart and brain. We watch as Iago sets up a sweet-faced Cassio, played so well by Finn Wittrock, to be the imagined lover to Othello’s wife Desdemona.

As we watch the mark, Othello be set up by Iago, we observe the tyranny of false news setting a fire of hatred among individuals and a community. David Oyelowo as Othello is a pillar of ebony perfection. He takes the stage at first as a man beset with love and we watch him devolve into a monster infected by “the green-eyed monster” of jealousy.

In the scene where we see him lose his countenance the lighting designer, Jane Cox, lights the stage in green LED lights and uses the light of cell phones and devices to create a ghostly pallor. At times with the stage lit by devices rather than theatrical lighting I wanted to see more clearly, but I applaud the creative use and the metaphor of all the machine lights in our modern life that flood us and yet perhaps divert us from the real life and light around us.

And so the story unfolds. The audience returns after intermission and the actors roar back onto the stage and alas we know what will greet us. Desdemona is murdered, strangled viciously by her Moorish husband; all the while Iago is setting about killing Cassio, Roderigo and finally shoots his own wife Emilia. Cassio’s sweetheart is dispatched (the very affable Bianca played by Nikki Massoud, an actor I hope to see more of in the future). The floor is littered with bodies and blood. The screams have subsided and yet there is more.

Craig and Oyelowo surge at each other wrestling, thrashing on the floor, certainly earning the knee and elbow pads worn for this very athletic production. Then Othello finds a knife hidden under his mattress and stabs himself, leaving only the wretched Iago heaving in horror. The soldiers cover the bodies and silence descends. Iago moves across the stage and touches Othello’s back and we are pitched into black.

The audience rises to their feet and the cast runs out for curtain calls. We are so close, we sense and share their exhilaration and exhaustion. This play is a Herculean event that leaves nothing, as they say, on the field.