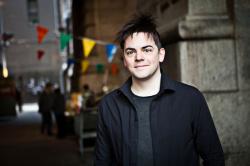 The iconic American composer Philip Glass turned 80 this January and we who adore him and his music are lucky in that during his 80th year we will be feted with many different concerts in his honor.

I am sure one of the best was held February 8 at Carnegie Hall’s intimate Zankel space. It was an evening entitled “Nico Muhly and Friends Investigate the Glass Archive.” There could be no one more adept and intimate with Glass than Muhly, who as a teenager was an intern archivist in Philip Glass’ publishing and recording studio. According to program notes, “I am sure I was the worst archivist in the history of the discipline. Any semblance of efficiency went out the door when I realized how layered and shuffled the pages were, and how many gems were hidden there.”

For this evening Muhly arranged a selection of Glass work both known and a tad more obscure. In his opening remarks, with characteristic pluck and humor, Muhly announced that the works are not listed in the program ” Mostly to drive Carnegie Hall crazy, but also to allow us to find the best order for things. So I will announce the works from the stage.” This was wonderful as each announcement gave Muhly a chance to say why it had been picked from the extensive Glass archive.

Muhly’s “Friends” for this performance were the clear voice of Estelli Gomez, long time collaborator Nadia Sirota on viola, Lisa Kaplan on Piano, Chris Thompson on percussion and Caroline Shaw on violin and vocals. Muhly also played piano or keyboards and conducted the evening with nods and smiles to each performer. The works unfolded with a precision that would be admirable in a military environment, but instead, this was glorious modern music. The sounds, the drones, the nuanced change in scales and rhythms, for me all combine to create a true vibration of the spheres. All around one could see heads nodding, bodies swaying and New York City nerves unjangling by virtue of the magical sounds.

The evening began with what Muhly describes as “three little bits” from “Etoile Polaire:” “Are Years What,” “Étoile Polaire” and “Lady Day.” The next offering was from Monsters Of Grace, a work created in collaboration with Robert Wilson. It has texts by the mystic poet Rumi. These pieces are: “Like This,” “Don’t Go Back to Sleep” (link below) and “Boy on Fire.”

As an incredible treat to those of us, especially who have followed Glass’ works for many decades, Laurie Anderson intoned the text to “The Civil Wars” in her signature style which always renders the most from spoken word since she launched her recording career in 1981 with “Oh Superman.”

The evening wrapped up with Muhly, in his self-deprecating way saying how difficult it is for composers to end pieces, but that Philip Glass seems to be so adroit and on point with his endings. And so we were treated with the endings to “Mishima” and marvelous 1980 opera “Satyagraha.” (www.youtube.com/watch?v=CHKUt5fDbH0)

Although this was a one-off concert, look to the immense and inspirational Philip Glass cannon that will be in performance throughout out the year.